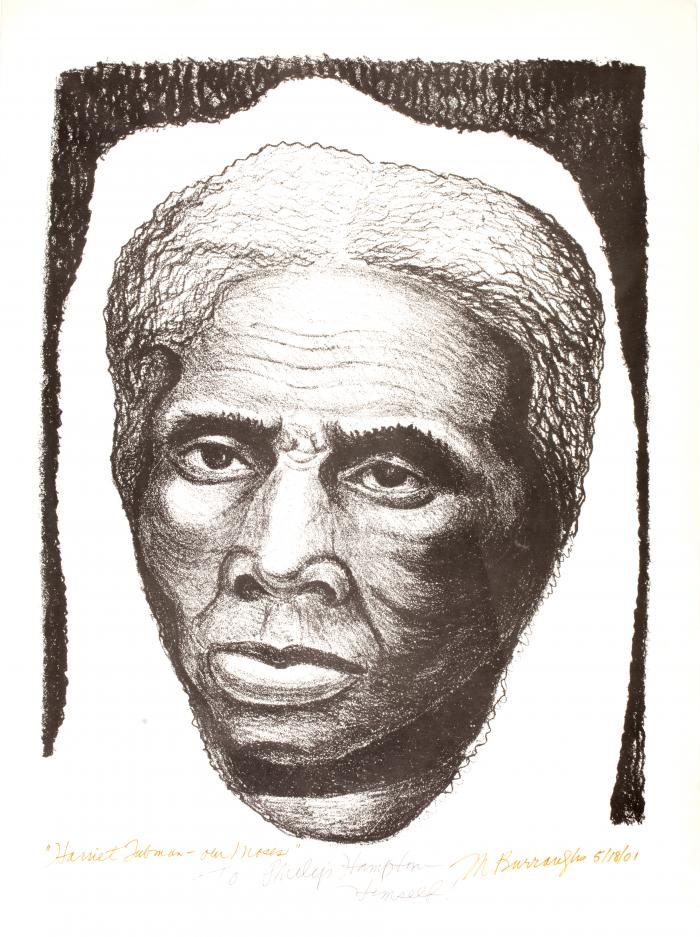 Harriet Tubman (1822-1913) was born into slavery on a plantation in Maryland. In 1849, she escaped from bondage and made her way to Philadelphia where she proclaimed her freedom. Over the next ten years, Tubman returned to the south thirteen times to rescue other enslaved family members and friends, bringing them north to freedom along the Underground Railroad. During the Civil War, Tubman served in the Union Army as a cook, nurse, armed scout and spy, and helped to liberate more than 700 additional enslaved people. Tubman eventually settled in upstate New York and became an activist for women’s right to vote. Even during her lifetime, Tubman was regarded as a hero by many African Americans, who sometimes referred to her as “our Moses.”

This image of Harriet Tubman was created by Margaret Burroughs in 1953. When she was three years old, Burroughs’ family moved from Louisiana to Chicago as part of the Great Migration. Burroughs earned a teaching certificate from the Chicago Teacher’s College in 1937, and bachelor’s and master’s degrees from the School of the Art Institute of Chicago in 1946 and 1948. She worked as an art teacher at DuSable High School in Chicago from 1946 to 1969, and as a humanities professor at Kennedy-King College in Chicago from 1969 to 1979. In 1961, Burroughs and her husband founded the Ebony Museum of Negro History and Art (now called the DuSable Museum of African American History), where she served as director until 1985. Throughout her career, Burroughs was proud to promote African American history and identity, but she also believed in bringing different communities together through the power of art.