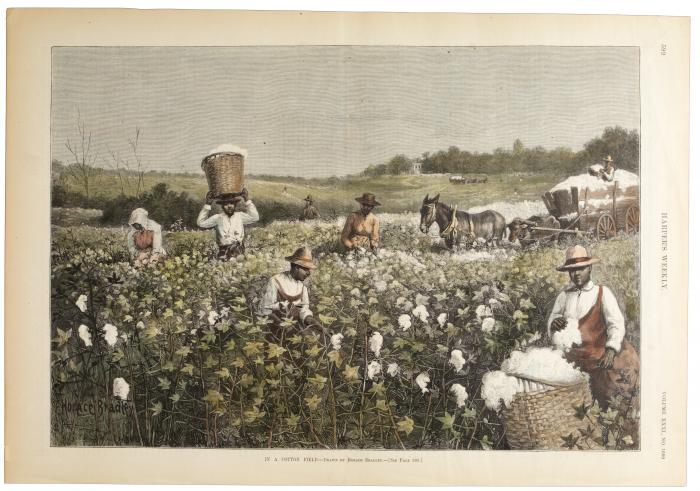 In a Cotton Field

Before 1865, the profitability of America’s cotton economy depended on the unpaid labor of millions of enslaved Black people. After slavery was abolished, the federal government originally planned to help the freedmen achieve financial independence by giving them farmland that had been abandoned by or confiscated from former Confederate soldiers. However, this plan quickly ran into stiff resistance from Southern politicians who passed state and local laws restricting the ability of African Americans to own land and pass it down to their heirs. Instead, many newly freed Black people were coerced into sharecropping relationships with white landowners in which they essentially rented a portion of land in exchange for a percentage of the land’s annual crop yield. The share of the crop they were required to pay typically varied between thirty and fifty percent. Moreover, the sharecroppers were often forced to rent tools, draft animals and other supplies from the landowners, who deducted those costs from the amount they returned to the sharecroppers after the harvest was sold. If the harvest was small or cotton prices were low, the sharecroppers ended up without money and in debt to the landowners, which in turn reduced their ability to negotiate better rents or leave for a better situation. If they were even aware of it, many white people at the time chose to ignore this exploitive situation, preferring instead to imagine that Black sharecroppers were happy, independent farmers, as is suggested by this cheerfully colored print from an 1887 edition of Harper’s Weekly.