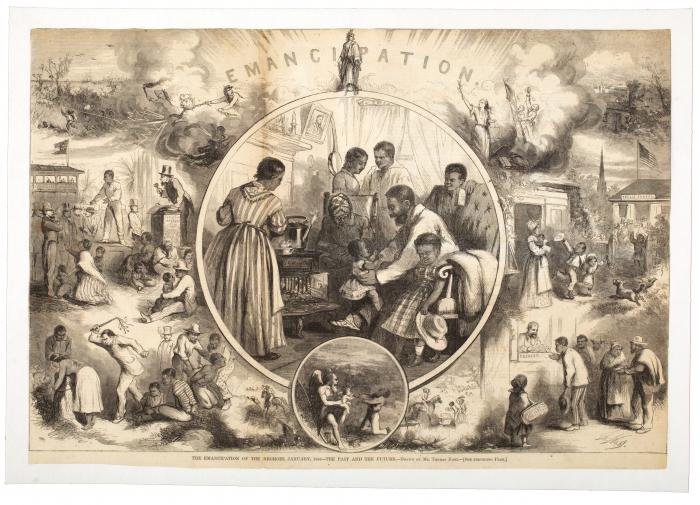 This print was published in Harper’s Weekly magazine on January 24, 1863, just three weeks after the Emancipation Proclamation went into effect. The left side of the print features three images depicting some of the horrors of slavery. In the upper left corner, slave catchers with dogs and torches chase a group of terrified Black people who are escaping through a marshy landscape. The middle left scene portrays a slave auction, where an enslaved Black man is being sold while his wife and children beg a white slave buyer to keep their family together. In the lower left corner, a white man whips an enslaved Black woman who is chained to a tree stump, while nearby an enslaved man is branded by yet another white man. The right side of the print features a second set of images depicting the happier conditions that will prevail after slavery is abolished. The upper right corner portrays a simple farmstead where a formerly enslaved family can live freely and independently. The middle right scene depicts a free Black mother sending her children off to be educated in a public school. In the lower right corner, free Black men and women wait in line to receive fair wages for their work. The image in the print’s central panel portrays the ultimate goal of emancipation: an intact, multi-generational, prosperous Black family enjoying life together in a comfortably furnished home that includes a Union-brand stove and a picture of Abraham Lincoln hanging on the wall. The central image of the Black family is one of the first in American art to portray African Americans in a positive light without resorting to stereotypes of them as either a brutish or a brutalized people.