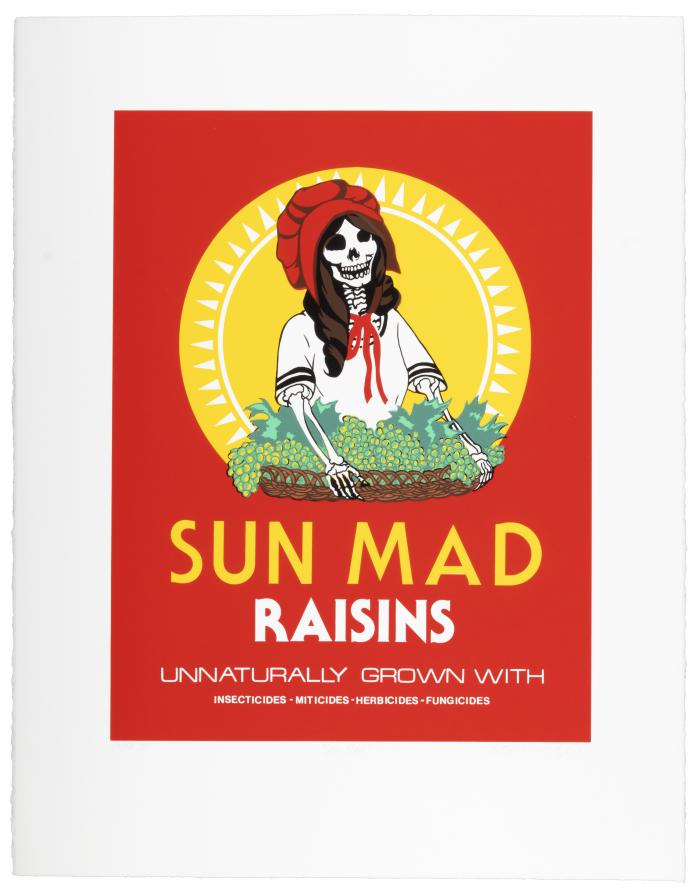 The so-called “Green Revolution” that transformed global agriculture beginning in the 1960s was made possible by decreasing the number of plant varieties that were cultivated as food crops while increasing the use of chemical fertilizers, herbicides, and pesticides. These changes resulted in much higher crop yields that could feed millions more people than traditional agriculture, but they also came with significant environmental costs that often fell most heavily on economically disadvantaged countries and communities. Ester Hernandez was born in California into a farm worker family of Mexican/Yaqui Indian heritage. She studied anthropology at the University of California, Berkeley before becoming a professional artist in the 1970s. Hernandez quickly gained a reputation in the emerging Chicano art movement for her mural paintings, posters, and other artworks that celebrate Mexican American identity and culture. This print parodying the imagery of the famous Sun Maid raisin brand is one of several artworks created by Hernandez to draw attention to the use of dangerous chemicals and the exploitation of migrant farm workers in America’s agricultural industry. A large proportion of America’s fresh fruit and produce is harvested by migrant workers from Mexico and Central America, who typically work long hours, under difficult conditions, for low pay. Despite the vital role they play in our nation’s economy and food chain, these workers are highly vulnerable to unfair treatment and abuse, especially if they are undocumented immigrants.