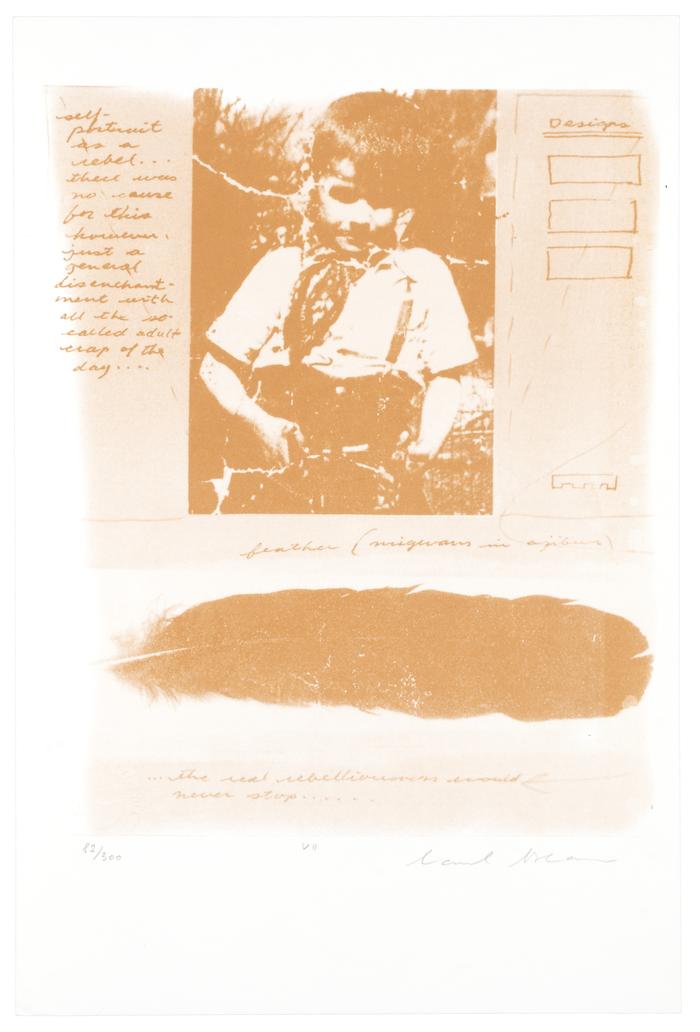 Plate VII: Self Portrait as a Rebel

Carl Beam was born a member of the Ojibwe M’Chigeeng First Nation on Manitoulin Island in the Canadian portion of Lake Huron. At age ten he was taken from his family by the Canadian government and forced to attend a residential school in Spanish, Ontario where he and the other First Nations students were not permitted to speak their native languages or practice their traditional cultural customs. After graduating from the residential school at age eighteen, Beam moved to British Columbia and began training to become an artist at the Kootenay School of the Arts. He eventually completed his art studies at the University of Victoria where he earned a Bachelor of Fine Arts degree in 1974, and at the University of Alberta where he earned a Master of Fine Arts degree in 1976.

Beam’s artworks typically feature combinations of images and texts that allude to both historical and contemporary issues in First Nations society and culture. This print belongs to a larger suite that Beam created in response to the 500th anniversary of Christopher Columbus’s 1492 arrival in the Americas, an event that ultimately had devastating consequences for the indigenous peoples already living on the two continents. It juxtaposes a photographic portrait of Beam as a child with an image of a feather. Beam’s maternal family surname was Migwans, which means “little feather” in the Ojibwe language, so Beam often used images of feathers in his artworks as symbols of his own Native identity.