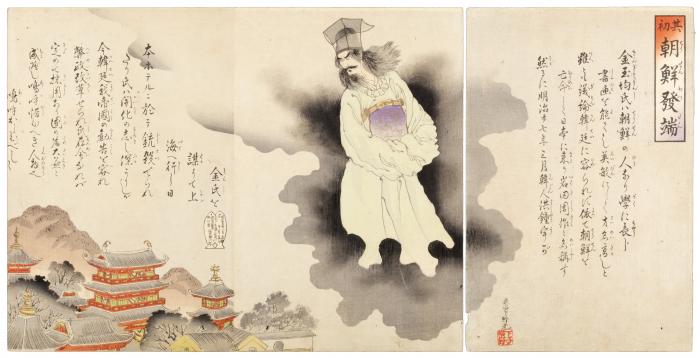 The Origins of the Korea Incident

The figure depicted in the central panel of this triptych is Kim Ok-gyun (1851-1894), a Korean political dissident whose assassination in 1894 was used by the Japanese as a pretext for sending military troops to Korea and starting a war with China.  Inspired by the 1868 Meiji Revolution in Japan, Kim led a movement in the 1870s and early 1880s to overthrow the ruling Joseon dynasty in Korea and establish a new, more modern state.  When Kim’s 1884 coup attempt failed, he fled to Japan and lived there in exile for ten years.  In 1894, an agent hired by the Korean court lured Kim to China and murdered him.  Declaring itself to be outraged by this "incident,” the Japanese government sent 7,000 troops to Korea to demand that it cut ties with China and reform its government.

The Origins of the Korea Incident was produced in 1894 as political propaganda by the Japanese government to justify its military actions in Korea.  Artist Adachi Ginko was a professional illustrator who in the 1870s and 1880s produced actor portraits, theater scenes and images of contemporary life.  In 1889, he was jailed for designing a satirical print that portrayed the Japanese emperor as a skeleton accepting a new constitution from the country’s parliament.  Five years later Ginko was firmly on the government’s side, producing a number of propaganda prints supporting Japan’s war with China.  His last known artistic work was a series of illustrations for a martial arts manual in 1898.