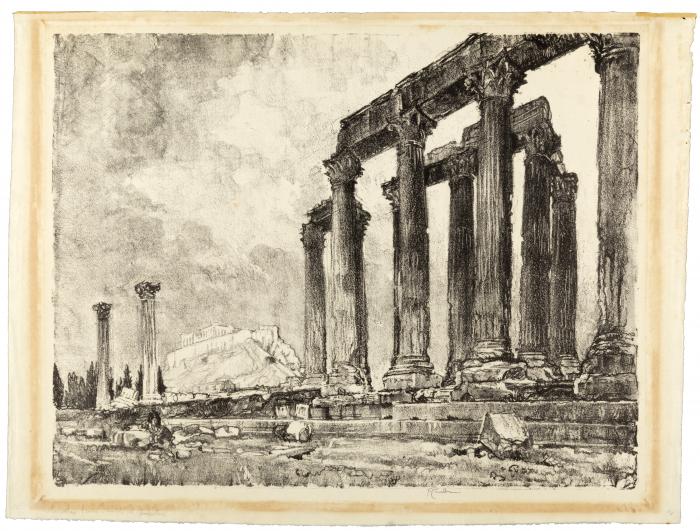 The Acropolis from the Temple of Jupiter in Athens

The Acropolis is an ancient citadel located on a hilltop in Athens, Greece. It is home to the Parthenon, the Temple of Athena Nike, and other important buildings dating from 5th century BCE. The Temple of Jupiter, also known as the Temple of Olympian Zeus, stands in the center of Athens. Built between the 6th century BCE and the 2nd century CE, the temple was dedicated to the god Zeus (also known as Jupiter, to the Romans). The Acropolis and the Temple of Jupiter are among the most famous symbols of classical European civilization and served as inspiration for many late 19th and early 20th century buildings in both Europe and America. Joseph Pennell was a major American printmaker who specialized in topographical and architectural subjects. This print belongs to a series of forty lithographs Pennell created in 1913 depicting famous ancient monuments and landscapes in Greece. The series was inspired by Pennell’s desire to understand the architectural roots of the Neo-Classical
and modern buildings that he so often depicted in his work.

Buildings Bridges and Other Structures