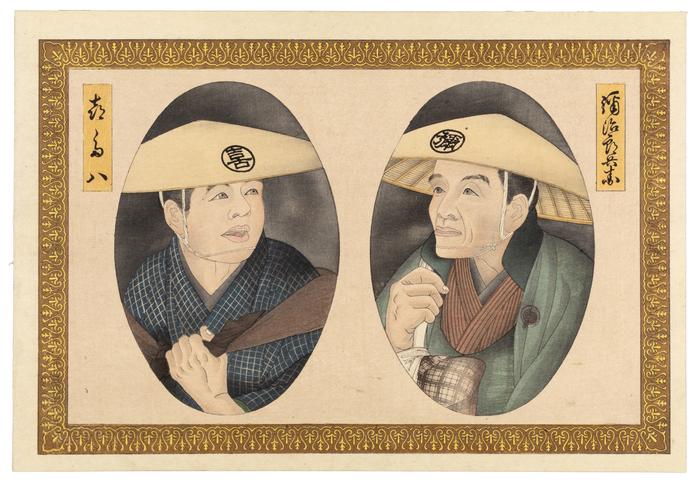 Written by Jippensha Ikku (1765-1831), Shank’s Mare Tokaido is one of Japan’s most famous novels. The novel was originally published in serial installments between 1802 and 1809 with additional sequels and supplements published between 1810 and 1822, and it has been reprinted many times in both Japanese and foreign language editions. The novel recounts the adventures of two friends, Yajirobe and Kitahachi, as they travel along the Tokaido, an important road connecting the cities of Edo (modern Tokyo) and Kyoto and eventually on to Osaka. Yaji and Kita, as they are usually called, are good-natured bumpkins whose misunderstanding of the characters and customs they encounter along their journey provides most of the book’s humor. The novel was written at a time when leisure travel was first becoming widely popular in Japan, and although the story is fictional, it is filled with vivid descriptions of people, places and things that make it a valuable source of information about Japanese popular culture during the Tokugawa period (1615-1868).

This image, the first in a suite of 60 woodblock prints illustrating different episodes from the novel, portrays the two heroes. Yaji is slightly older and a lower-level member of the merchant class while Kita is younger and former Kabuki actor. The notes that accompany the suite alert us that Yaji is typically depicted wearing solid-color outer clothes while Kita typically wears clothes with stripes or cross-hatch designs. Here we see Yaji on the right and Kita on the left, both wearing straw traveling hats and ready for their journey to begin.