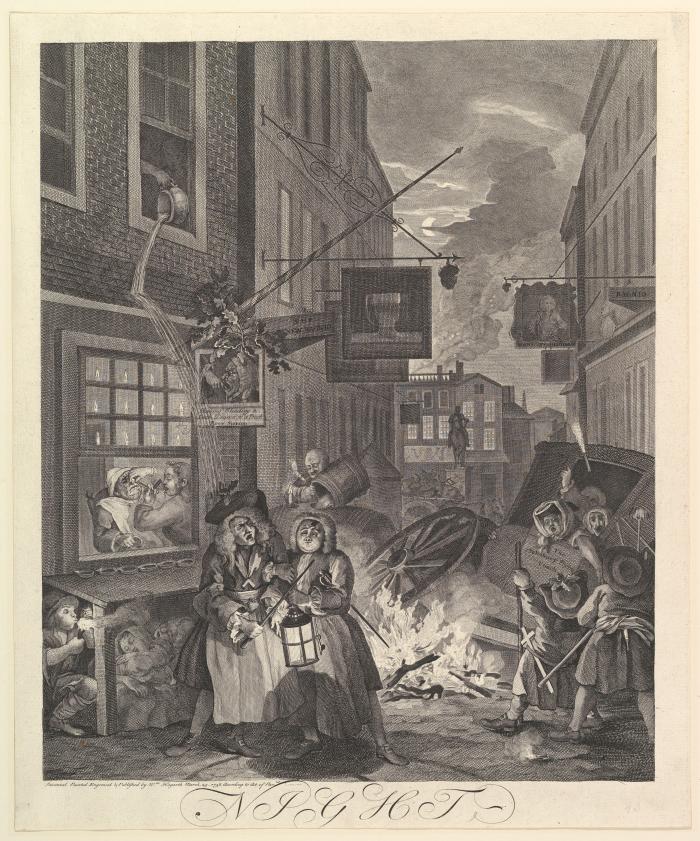 The Four times of Day

This print and its three mates are based on a set of paintings created by William Hogarth in 1736. The images portray London street life and are full of humorously observed details about different social behaviors and cultural customs of that period. Each image is set at a different time of day, in a different season, and in a different part of London. Morning is set in winter and depicts a middle class woman going to church near the Covent Garden market. Noon is set in spring and depicts a group of Huguenots leaving their church in Hog Lane near St. Giles. Evening is set in summer and depicts a pregnant woman and her husband trying to escape the heat at Sadler’s Wells on the outskirts of London. Night is set in autumn and depicts a street bonfire on Charing Cross Road. Positive reviews of the paintings led Hogarth to reproduce the images as a set of engravings in 1738. He sold the prints by subscription and printed as many as he could sell. When Hogarth died in 1764, he left the printing plates to his wife Jane. Jane later sold the plates to a publisher named John Boydell, who issued a new edition of the prints in 1790 as part of a larger bound volume titled The Original Works of William Hogarth. The plates changed hands again in the early 19th century and were used by William Heath to produce a third edition of the prints in 1822, again as part of a larger compilation of Hogarth’s work. These impressions likely come from the 1822 edition.