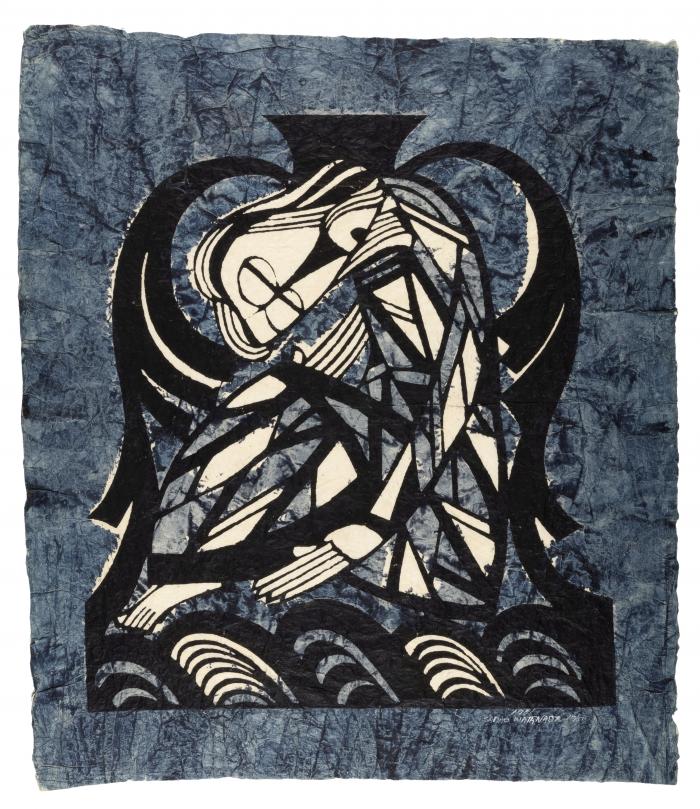 Christ in the Garden

After being outlawed in 1634, Christianity was legalized by the Japanese government in 1871 as part of a broad series of reforms initiated by the newly installed Meiji Emperor. Numerous European and American missionaries moved to Japan during the late 19th and early 20th centuries and began trying to reestablish the Christian faith in that country. One Japanese convert from this period was Sadao Watanabe, who first attended a Christian church in Tokyo in 1923 shortly after his father’s death. When he contracted a severe case of tuberculosis a few years later, Watanabe attributed his recovery to the power of God, and he was baptized into the church at age seventeen.

Watanabe initially trained as a textile dyer and worked a series of menial jobs in that field until he met Serizawa Keisuke (1895-1984), a prominent folk artist who taught him the traditional techniques of katazome stencil decoration. Under Serizawa’s guidance, Watanabe learned to use stencil techniques not only for designing textiles but also for printmaking. Although Watanabe’s technique was rooted in Japanese culture, his subjects were always Christian and his style more closely resembled medieval European art. This dynamic image of Jesus Christ agonizing in the Garden of Gethsemane on the night before his crucifixion is a classic example of Watanabe’s mature work and reveals why he is now regarded as one of the most innovative Japanese printmakers of the 20th century.