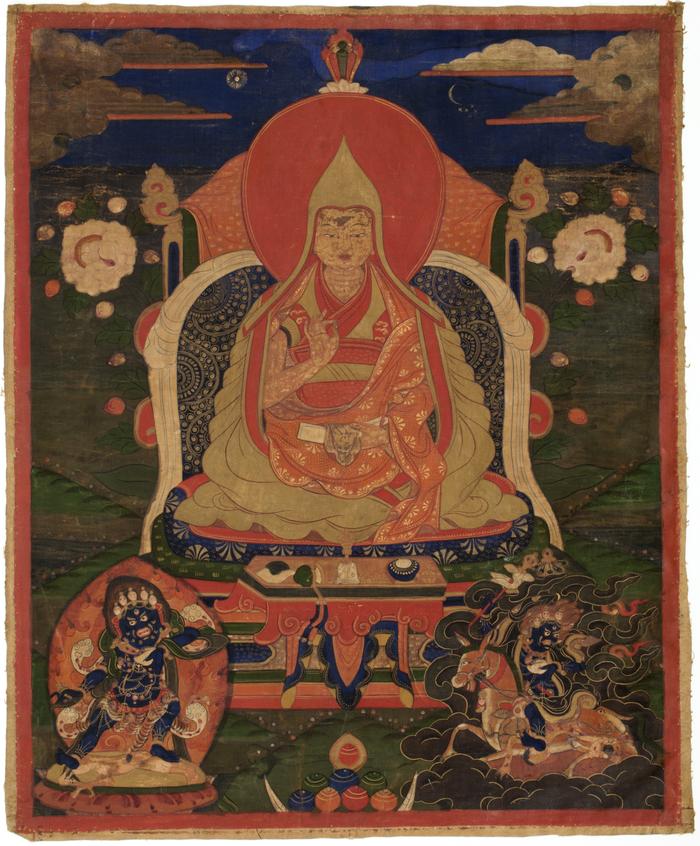 Probably the most famous lama in Tantric Buddhism is the Dalai Lama, whose title literally means “Ocean Lama.” This title was first granted to the Tibetan Gelug patriarch Sonam Gyatso (1543-1588) by the Tümed Mongol chief Altan Khan (1507-1582) in 1577. Backed by Altan Khan’s political and military power, the Gelug order became the dominant school of Buddhism in Mongolia and Tibet, and the Dalai Lama became the supreme religious authority in both countries. Although Sonam Gyatso was the first monk to be called Dalai Lama, the title was applied retroactively to two of his previous incarnations. Therefore, Sonam Gyatso is officially known as the Third Dalai Lama. Since Sonam Gyatso’s death in 1588, the title of Dalai Lama has been passed on for eleven generations to monks who are recognized as reincarnations of their predecessors. The figure depicted in this painting is probably either the Third or the Fifth Dalai Lama. He is portrayed sitting on a textile-draped throne, wearing the robes and hat of a high-ranking Gelug cleric. His right hand is held in front of his chest making a teaching gesture, while his left hand rests in his lap holding a sutra. He is flanked by two guardian deities: Magzor Gyalmo, who is regarded as the personal protector of the Dalai Lamas, in the lower right corner; and the inner form of Yama Dharmaraja, who is regarded as a special protector of the Gelug order more broadly, in the lower left corner.