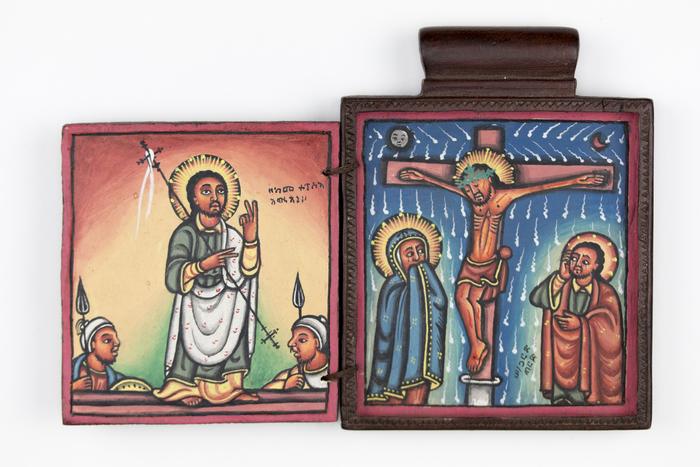 Pendant Icon with the Crucifixion and Resurrection of Christ

Gift of Neal and Elizabeth Sobania

Although they are no longer commonly worn in Ethiopia, pendant icons were traditionally strung on a leather cord and hung around the neck to express the wearer’s faith, to protect him or her from harm, and to have a devotional object close at hand.  Depending on the depth and quality of the wood case, pendant icons can be either single or double-sided and typically contain two to four images. The two most common subjects in pendant icons are Our Mother Mary and Her Beloved Son paired with Saint George Slaying the Dragon. Other common subjects include the Crucifixion and Resurrection of Christ (usually represented by the raising of Adam and Eve) along with images of various Ethiopian saints. The use of pendant icons in Ethiopia dates back to the 15th century and reached a peak during the 17th and 18th centuries. It is important to note that although many contemporary pendant icons are made for the tourist trade, anything that depicts biblical imagery still has great religious value in Ethiopia. A deacon in the Ethiopian Orthodox Church, Gard Gidey learned to paint by copying murals in the church of Seaka Enda Iyesus in Adit, a locale near Aksum. Early in his career Gard sold many of his paintings to foreigners through a souvenir shop in Aksum, but today much of his work is made directly for churches on a commission basis.  [Nina Kay ‘19]